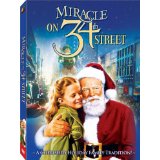 1. Miracle on 34th Street We did it again this year. On Thanksgiving Day, we watched the black-and-white 1947 version with a young and very precocious Natalie Wood. The movie is set in NYC. What’s not to love about that? The upper West Side apartment overlooking Central Park West. I’ve walked there so many times. The bubble gum scene. Kris Kringle’s absolute cheerfulness.

The dialogue is crisp, funny, and filled with heart. The defensive exterior that Doris Walker has built up after having her dreams crushed. How many of us haven’t spent some time building that wall? The all too determined effort by her daughter, Susan (a young Natalie Wood) to be just as matter-of-fact as her mother.

Susan Walker: If you’re really Santa Claus, you can get it for me. And if you can’t, you’re only a nice man with a white beard like mother says. Susan Walker’s moments before her ‘epiphany’: I believe, I believe. It’s silly, but I believe.

Kris Kringle’s scene with Susan ( but really talking to us): Christmas isn’t just a season. It’s a frame of mind.

Politics, lawyers, and love nicely blended with the magic of Christmas. Alfred to Kris Kringle: Yeah, there is a lot of bad isms floating around this world and one of the worst is commercialism.

Mr. Shellhammer: But… but maybe he’s only a little crazy like painters or composers or… or some of those men in Washington.

Fred Gailey to Doris: Faith is believing when common sense tells you not to.

The timelessness of the magic of Santa for young and young at heart runs through the entire movie. If you haven’t seen Miracle on 34th Street (or it’s been a while) drop your cynicism and curl up on the sofa for 96 special minutes.