A Place as a Setting—and a Character-Normandy 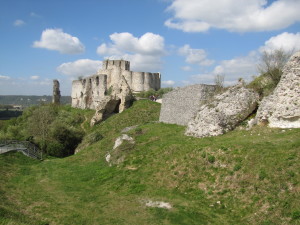 Have you ever walked into a place—even as ordinary as a post office, and there is a distinct atmosphere or mood? It’s true that many places have a history, and that certainly influences the mood. But some are almost as if the place still harbors the spirit of its inhabitants and has its own personality.

When we were in the Normandy region of France in April we were bombarded with history. The whole area is layered with conquests, battles, concessions, and the centuries of culture that each conquering group brought to the area. The result is a mix of architecture, foods, and culture and stories.

As we took the short hike up from the town of Les Andelys to Chateau Gaillard, a ruined medieval castle, I tried to imagine what it had been like as it was being built as a fortress on the Seine in 1196. Finally at the top, I ran my hand along the ruins of the wall—white stone blackened and worn in part by centuries of war and erosion. And the feeling came. Someone, maybe my age, most likely younger, had touched that stone, maybe fallen against it. Someone actually walked that same path. I looked down and felt goose bumps of excitement and awe. Can you feel a connection with someone who lived hundreds of years ago? I did. 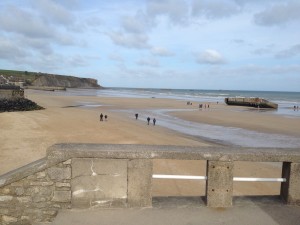 The Normandy Beaches. As I stood at the shoreline on Omaha Beach I tried to imagine the day 70 years ago when Allied soldiers landed in waves of men and artillery—hour after hour during the invasion of Normandy. The beach today is beautiful. The day we were there was sunny and mild. The beach seemed wide at low tide with a long stretch of sand up to the cliffs at Omaha. Surmounting the cliffs was the landing objective at Omaha. That’s when the feeling came. Soldiers, some as young as 17 and as old as 30, jumped into the water while murderous artillery from cannons capable of firing twelve miles held them in their sights. And thousands died. Paralyzing fear. The chill of water, the heaviness of holding equipment. What must a young man of twenty feel? Did he think? Or were feelings put somewhere in the back of his mind to emerge the next day, week, year, or years later? 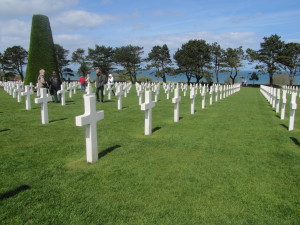 As a writer I am sensitized to a sense of place. Each new town in travel has its own character and mood. And I’m ready to meet it, experience the mood, and tuck it away to emerge in a story that is yet to be written.