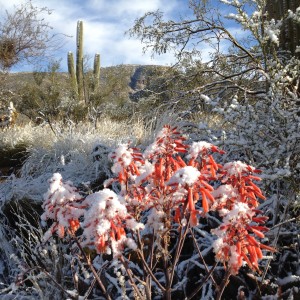 Magic of Snow in the Desert 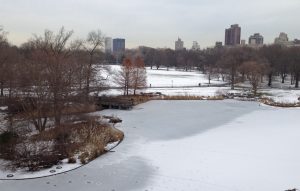 For most of my life I lived on the East Coast in the New York City metropolitan area. Winters consisted of freezing cold and snow, ice, blizzards, bare trees silhouetted against grey skies from November to mid-March. It was cold, dreary, long, changeable, yet magical. It always took my breath away to watch silent snow falling from my window and then to go outside and hear the exact same thing-silence. I experienced breath-taking moments watching seven deer tiptoe delicately across our backyard in the suburbs of New Jersey. It seemed inappropriate to laugh out loud on a late night walk in the middle of West 89 Street to Central Park in Manhattan. No taxis, no cars, only snowflakes joining their companions, blanketing everything in silence. 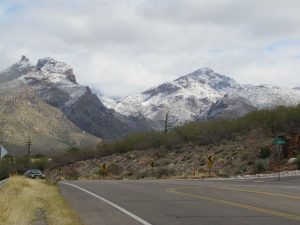 Snow on the Catalinas

When we moved to Tucson, Arizona, I thought I would give up silent snowfall. Not so. Tucson is surrounded by mountain ranges- the Catalinas on the north, Rincons to the east, Santa Ritas to the south, and the Tucson Mountains to the west. When it rains here in the valley in January and February there’s snow on the mountains at about a 7,000-foot elevation. It’s not uncommon to drive up the mountain to walk in the snow, make snowballs, and witness folks with pickups pile snow in the back of their truck to drive home for a snow-covered yard for a short-lived winter vibe.

In 2014 it snowed on New Year’s Eve. Driving home from my sister’s, my Hank said, “I have to remember how to drive in snow.” Large snowflakes blanketed the windshield. The swish swish of the wipers and scrunch of tires were the only sounds. 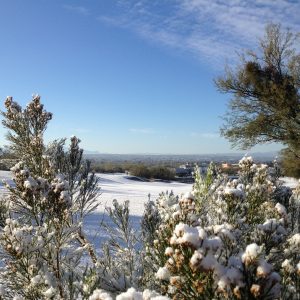 New Year’s Day we woke up to snow on the ground, on the street, on the sidewalk, on the fairway of the golf course outside our back patio. It was magical.

“Let’s go out for a walk.“ Put on a long-sleeve shirt, jeans, a light jacket, scarf and gloves, and boots. It’s cold, but not freezing. Walking in the snow at 7:30 AM. No other people around. Snow rests along tree limbs, snow puffs are tucked in the folds of prickly pear cactus. Expecting silence I’m startled by a click, click, click as we walk up the hill. Snow is melting and dripping down from lower branches, making a slow landing on frosty grass. We stop. Just look and listen. The melting snow makes tiny depressions in the snow still covering the grassy area along the fairway. The magic of snow in the desert. 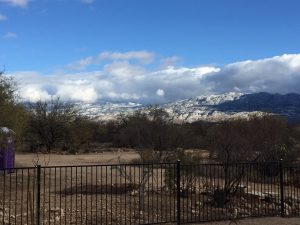 Postscript: Last week (Jan. 26) “winter” arrived. Here on the Eastside of Tucson we had rain, hail, sleet, and SNOW. Snow that stuck on the ground. Not much of a breeze but inhaling was an intake of crisp, fresh and clean air. A week later, snow is still visible up on the tops of mountains. Melting snow works its way down to Sabino Canyon and the dam is overflowing again. Nature has her way.

Smiling behind my mask

Ethel Lee-Miller blogs regularly about people, the power of words, and the writing life. She’s retired from professional writing gigs after 30 years of teaching, coaching, editing, and gathering writers to publicly share their work. She is the author of Thinking of Miller Place, and Seedlings, Stories of Relationships. In retirement she writes to inspire, to connect with folks, and for the pure enjoyment of it. Ethel enjoys sharing stories at Odyssey Storytelling, Zoom gatherings, and anywhere there’s a Zoom mic.