But What’s the Backstory? 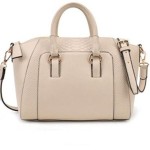 Robin’s mother-in-law wanted a new purse. A beige purse with an adjustable shoulder strap. No fancy stuff. Just plain and classic. But she deigned to go out and buy it herself, so requested (more like ordained) Robin to act as personal shopper. Linen bags, sport sacs, designer bags? No, no, not quite right. Too small, too big, not right. Did I mention that Robin’s mother-in-law, Sybil, was a discerning somewhat akin to royalty personality?

After numerous daily and failed attempts, Robin pared back the search for the perfect beige purse. Soon it was just when she went on vacation. Robin and Queen Sybil, as she was nicknamed (although not to her face), arrived at an impasse. Occasionally the purse was mentioned.

Sybil: Have you ever found…?

Robin: No, haven’t found one yet.

Years passed and the Queen was moving to an assisted living home. Robin’s sister-in-law was helping her mother cull out unwanted items. When they got to the clothes closet there among the old purses, handbags, and clutches, was a brandy new still in the packing papers beige designer Coach bag.

“Mom, here’s the perfect bag. Why haven’t you ever used this? Robin made so many trips to find one for you.”

Now at this point I suspect if Robin had been in the closet with the Queen there would have been bloodshed.

Some time later Robin and I and some other friends talked about this. We discovered each of us had a woman in our family exactly like this. Saving it for good. Use the old thin and faded towels, save those fluffy ones for good. Don’t use the good silver/china/jewelry. Each of these savers were in their 80s or older, had lived through the Depression, and/or deprived childhoods, loss of jobs, and very often “did without” so their children could have a better life. Their pasts provided a kind of “aha” to why they might have seemed so rigid, or selfish, or fearful.

We each had exhorted our mothers, aunts, or great aunts to throw “it” out. My mother’s response had been quite serious. “Oh no, one of you girls may need it someday.” At the time I thought it funny that I should want the old, threadbare towels or the tarnished incomplete silver set, but today I see that was her way of caring.

The savers’ backgrounds, or “backstories” as writers call them, shaped who they were, what their values were, and what decisions they made.

In a short story I am writing, two of my characters witnessed 9/11 in New York City. One also lived in Vietnam as a child. The other grew up in the inner city and her dad was a fireman. Guess who has nightmares and sells her city condo at a loss and moves to upstate New York within a year where her story evolves, and which one moves into NYC and counsels the firefighters at St Paul’s Chapel one block from Ground Zero?

Early in your story, build scenes to give some of the backstory. Not a lot unless the backstory is going to be key to the theme of the book. Larry Brooks, author of Story Engineering devotes chapters to what, where, and how to build a rich backstory. “What is your character’s backstory, the experiences that programmed how they think, feel and act today?” Rather than say someone cared or lived in fear, writers can show this with a bit of backstory about a saver or spendthrift, a giver or taker. Readers will relate to the backstory and so, to the character.