Dancing with My Mother

Sharing one of my favorite stories about my mother. She passed away in 2006 and yet I feel close and closer to her than when she was physically with us. This is an excerpt from Seedlings: Stories of Relationships.

I offer it as a memory, a possibility that relationships can and do change and deepen.

The Garden: A fully grown story that I cherish more each year. My time with my mother in the last five years of her life was the jewel in the crown of our relationship. Mom had the same birthday conversation with each of her daughters, not remembering her age, and being equally delighted each time she heard us tell her. Who says repetition is boring? 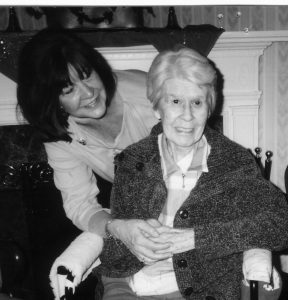 So what will it be today? This was the question I asked myself as I strode down the hallway of the Regent Nursing Residence to visit my eighty-eight-year-old mother. My mother was declining, both physically and emotionally. A hemorrhagic stroke three years earlier had robbed her of any thought of independent living. Her retirement home with its well-tended gardens, indoor plants, and tiny art studio adjacent to the washer and dryer on the lower level had been sold.

The stroke robbed her of right-sided movement, coordination to hold a paintbrush, and concentration for staying focused. Her activities were limited to wheelchair movement within the boundaries of the nursing home. Her patience and tolerance, never her strong points, were greatly reduced.

She was a true regent mother, garnering a private room with her own needlepoint armchair, drop-leaf table, and oil paintings from her dabbling in landscape and still life art. Most of the other residents shared both a room and institutional furniture. Mother thought the private room was only her due.

Although she spoke slower than before the stroke, she still remained strongly opinionated and curious. So each day’s visit was a toss of the coin as to which Mom persona would be sitting in the wheelchair of Room 104. If the blinds were open and her favorite big band CD was playing, I’d visit with the childlike Excited Mom who was a delightful and sometimes outrageous companion. “I have a great idea for Halloween. Next week. Bring my old bathing suit from the 1930s. The one I used to wear to costume parties. Liven things up around here.”

Or my mother’s body could be inhabited by what I called the Dark Force. Then the blinds would be closed, no light, no music. “Get me out of here,” she’d rasp. “They’re trying to kill me with boredom. Who wants to watch those ninnies on the soaps? They can never figure out the men are incorrigible rakes.”

Today the door was partly open. I arranged my smile and walked in. Blinds were open. Good sign. But no music. Not a good sign. Mom looked up from the picture album on her lap. She beckoned me with one curled finger, a terrific scowl on her face and brown eyes widened. “Come here,” she whispered. It was a Dark Force day.

“Hi, Mom.” I bent to give her a kiss. Her hand stopped me less than five inches from her face.

“This place is filled with old people.”

“This is a mistake. I don’t belong here. They’re all old and crotchety.”

I know it’s hard to believe, but I was relieved to hear this. My sisters and I weren’t sure if my mother was aware of her surroundings in the nursing home. She went to Bingo and played Trivial Pursuit in the activity room with other residents. But she had never asked about where she was.

Prior to the stroke, she had had almost weekly rants about the senior drivers in her town. “They drive like snails. Not the young ones. The ones with white hair. Those old people shouldn’t be on the road.” It was then an inner struggle to refrain from pointing out that she herself had more than a nodding acquaintance with the local traffic cop. Remember her warning tickets for speeding? The six of them lined up along the mirror frame in her dining room had been like old dance programs she had kept as a teenager. To hear her pick up a familiar thread of complaining was oddly comforting.

“Yes, Mom, most people are here because they got hurt or got too old and could not take care of themselves in their houses anymore. You had your stroke and now you have someone feed you and bathe you here because you could not do that at home. You have the doctor and nurses right here to give you your pills and check your heart.”

“Yes, yes, they’re okay. But the ones in the big room. Ethel, they’re all old ladies.” She curled herself even smaller in her chair and dropped her head in an exaggerated geriatric droop.

“Well, even though they are so old, isn’t there anyone here that you really like?”

My mom was no fool. She had some choices here. She could be really contentious and say she hated everyone or she could pick the most unlikely candidate just to play devil’s advocate. She knew how to keep things lively.

“I like Helen.” Helen was the ninety-four-year-old female terror of Regent House. Where my sisters and I had nicknamed the female residents The Regents, Helen could easily qualify as the Wicked Queen. Her daily conversation was more than sprinkled with swear words. I think my mother was secretly envious of Helen’s freedom of speech. Helen had claimed a private table by the main column in the dining room, while other residents sat four to a table. No one objected to this because no one wanted to sit with her anyway. For some reason Helen had taken a liking to my mother and requested that Mom sit at her table. She would exhort my mother, who could only swallow pureed foods, to eat up.

“Gladys, you eat like a bird. What’s this crap they’re feeding you anyway?” She had to be stopped from putting biscuits and chicken wings on my mother’s plate. She snuck contraband chocolate chip cookies into the bag on my mother’s wheelchair, which my mother took back to her room and dipped in water until they were soggy enough to swallow. Socially, it was a good match. Helen talked up a storm and my mother’s speech was slow and hesitant. Mom seemed quite comfortable with the eating and entertainment arrangement with Helen in charge.

Thinking of something to report about her day that also contained some shock value gave my mom a conversation opener. “Helen said a naughty word this morning at breakfast. The aide wanted her to apologize for saying it in front of me, but I told her it didn’t bother me at all.”

I didn’t bite at the bait to get into a game of Guess the Swear Word whereby I would have to recite all the four-letter words I could think of thereby titillating my mother’s sense of racy living along with giving her the opportunity to play chastising mother at my speech. I saw a way to make my point about the median population at her residence. “Well, you know, Helen is in her nineties, Mom. Wouldn’t you say that’s old? She fits into the old lady category and you like her.”

“That’s Helen.” Mom dismissed my argument with a wave of her unimpaired hand. “She’s different. But the rest of them. Old nincompoops.”

I tried again. This was a possible segue into the conversation I wanted to have with Mom. Not a perfect segue, but you have to take the opportunity when it comes.

“Mom, your birthday is next week. Your other darling daughters will be here. I can bring a big cake for the residents.”

“How about candy for the staff? We’ll have a celebration. Sing some songs. Talk about some of the exciting things you’ve done in your life.” I tapped the photo album from her trip with my father to Paris in the 1970s.

I persisted in laying the groundwork for the birthday celebration. “I’ll bring balloons. You’ll get to wear the birthday tiara.” This was a silvery crown polished up for each birthday girl in our family. “We’ll play ‘Moonlight Serenade’ and you can tell us about you and Dad dancing.” My mother and father had been reigning dance champions in our family. They danced at home in the kitchen. Or Dad would lead Mom in a smooth fox trot on the porch on summer nights. Even into their late seventies, they went square dancing once a week. Their biggest claim to fame, albeit in a dance group, was dancing at the 1965 World’s Fair in New York.

“You and I will dance,” I countered.

Mom hit the arm of the wheelchair with her left hand. “In this?”

“Yes.” I was not my mother’s daughter for nothing. I took a risk. I reached over and clicked on the CD player. Sounds of Glenn Miller began to fill the room. I reached down and released the brake on the wheelchair. My mother’s gaze followed my hand. The next few minutes were carried out in slow motion.

I lifted the photo album and put it on the bed. I stood up, reached out on either side of the wheelchair, and turned it to face me. Standing in front of my mother, I waited while she raised her eyes to look at my face. I raised my right hand, palm open, an invitation to the dance.

My mother looked at my hand, slowly lifted her trembling left hand, and placed it in mine. I started to sway side to side. She mimicked my movements, rocking left and right.

“Here we go, Mom.” I began to circle around the chair, gently holding my mother’s hand in mine. Up over her head and around. When I had gone full circle, I let go of her hand, took hold of the wheelchair armrests, and began turning the chair.

“Thank you for the dance, madam.”

As I straightened up from my bow I saw my mother had dipped her head down, eyes closed in acknowledgment.

Mom rested her chin in her hand and looked off to the side. “I suppose we could dance for my birthday.” She peeked at me without turning her head, like she was at the crossroads of a decision. Excited Mom was coming back.

“Yes, we will. We’ll dance for everyone.”

Mom contemplated this with a thoughtful look down. A slow nod. “You pick the music.”

I was doing the fist pump internally. Yeeee-sss. “Of course, madam. It will be my pleasure.”

“And bring the biggest chocolate chip cookies you can find for the biddies.” She had her pride.

She shrugged, but smiled as she glanced away.

Now I was curious. “Do you remember how old you will be?”

Mom looked intrigued at this question. “How old?”

“Mom, you will be eighty-nine years old next Thursday.”

My mother’s face was a mosaic of emotions. She went from looking completely surprised, to wondering, and then absolutely delighted. Her dark brown eyes actually sparkled like I hadn’t seen in weeks. She sat up straighter as a smile captured her face. “Really! I look pretty damn good.”

Ethel Lee-Miller blogs regularly about people, the power of words, and the writing life. She’s retired from professional writing gigs after 30 years of teaching, coaching, editing, and gathering writers to publicly share their work. She is the author of Thinking of Miller Place, and Seedlings, Stories of Relationships. (books available on Amazon or contact me. In retirement she writes to inspire, to connect with folks, and for the pure enjoyment of it. Ethel enjoys sharing stories at Odyssey Storytelling, Zoom gatherings, and anywhere there’s a Zoom mic.