Renewing My Pledge to Never Forget 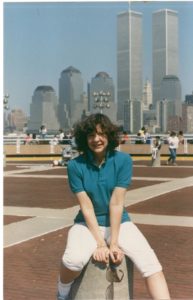 9/11/16. Fifteen years.
The 1989 photo was from Liberty Park in New Jersey. We were enjoying the day–had a picnic with Jill and Kenny, and Steve. Jill and I specifically took pictures with the Towers in the background to be in the picture with something so grand. There were bands playing and there was a relaxed and happy feeling at the park. How I cherish those photos today.

Hank worked at 120 Broadway and took the Path into New York City from New Jersey every day. Divine guidance had us vacationing in upstate NY on 9/11. That morning he and my sister were by the lake instead of taking a train into New York.

A week after 9/11, Hank and I drove over to Eagle Rock Park in Essex County New Jersey. The skyline of NYC was still hazy with smoke and you could see a thin plume spiraling lazily upward as if it were just

an innocent wisp. An ever-growing impromptu memorial of candles and flags, photos and letters lined the fence at the then Eagle Rock Park. Today that section of the park is the 9/11 Memorial Plaza, a tribute to the men, women, police, fire fighters, first responders killed in the bombings, at the Pentagon, and the four planes that crashed on 9/11.

St. Paul’s, the miracle chapel, at 209 Broadway became the respite station for Ground Zero workers. When we visited in 2012, the pews and ribbons and peace cranes, photos, teddy bears and soup kitchen lines were still set up. Banners, police patches, letters from men women and children from all over the world were laid out and layered over – not beautifully arranged, but piled up. You could almost hear it: “We care. Humanity believes in peace.”

When I stepped into the chapel in 2002, I felt as if I were back a year ago and had an immediate full body experience. I sat down and sobbed. Not wept. Not cried. I sobbed. For the people who innocently went to work that day, or got on a plane, or took the Path. I sobbed for the children who would never see their parents, and for our sad, but beautiful world where some people hold the belief that killing is a way to triumph.

In 2013 Hank and I visited the Memorial Pools at Ground Zero. It was a cold December afternoon. The sun was shining; the sky was just as blue as it was on 9/11. I remember how nature shined that day before the sky was darkened with black smoke and sheets of gray ashes and death.

The hour we spent at the North and South Pools was both enervating and inspiring. It is a memorial both spacious and beautiful. Flowing water to me symbolizes the flow of life, the changes, and the cleanliness that can come when people care and honor lives together.

Today, fifteen years later, I read that the children of 9/11 victims will be part of today’s ceremonies in New York, commemorating the loss of thousands of lives; I read that families of victims are uniting in caring. My heart goes out to them with compassion and pride. America may have its problems, but I believe people hold the capacity to look inside their hearts and pass over the inane, the foolish, and seductive evil of one person being better than another. I’m not a crusader, I’m not overly political, but I am proud to be an American. I honor my citizenship by greeting my neighbors, helping newcomers, gathering folks, both friends and strangers, to share time getting to know each other.

I cannot change my neighbor, my friend, or anyone who chooses to hate. I can change myself. And I believe that can influence others to look at themselves. I can choose kindness, compassion, courage, strength, empowerment and love. The photo of the white flower in the stone shows strength and softness. I’m keeping that image in my mind today.

Now I’m going to put up our flag.

Tribute in Light will again be lit today and remains on until dawn Sept. 12.