Start with a House: Part One 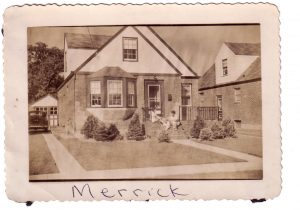 How To Begin A Story

Where can a story begin? “Start with your childhood home.” That advice from Jim May at a Tellers of Tales workshop in Tucson took me back to sitting on the floor in our living room in Merrick New York. The carpet was thin, but thick enough to alternately be an ocean, a patio, or a foundation for building a house for my dollhouse family.

When I shared this house idea with my  husband Hank, we tallied up the numbers of places we’ve lived, both together and before we met.

This led me down into a warren of homes. I never realized how many places have been home to me. Now in my eighth decade, my tally is up to eighteen.

What did each home represent for me? Certainly, it was not apparent what the overriding feeling was to live in most of the places while I lived there. Taking time to look back has been nostalgic, sometimes sad, but mostly very enjoyable. Each home was important. Looking back from my current home, I can pick out bits of memories of each home and what they symbolized for me.

If you need a boost for writing and want to do memoiric work, this can be an excellent jumpstart. As I brainstormed for this writing, I began to see it as is kind of a retrospective. I’m taking a trip and stopping at each home to reflect a bit on who I was becoming then. Once I got started, I was really into it. Looking at photos, talking to my sister, husband, and facebook friends from years ago were like writing prompts in themselves. If you’re not into memoir, the truth can be revised for a piece of fiction, or fantasy, or mystery. I know I’ll be returning to this theme a lot. Start with a house.

Take it as a stream of consciousness exercise. List each house, with or without the year(s) you lived there. Maybe add who else was in the house. Attach one word or phrase to each home you’ve lived in that describes its importance. Expand, layer, combine, or contrast homes. Will your focus be on the architecture of the house, the colors, the location, the people in it? Will you make a chronological list? List them in size order? Happiness factor? Anything is possible. How many possible stories will you have?

2. The Miller Place house on the north shore of Long Island was the oasis in my life. I spent 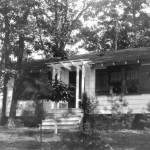 the first sixteen summers of my life there. We packed up the station wagon and drove out to the house when school ended. June, July, and August – three months for sixteen years amounts to about four years. Those times impacted me in the most fulfilling way. More about that later. Lots more.

3. When I went to college in 1965, (yes, this is history now) it was a protected environment. Wagner College is situated on Grymes Hill on Staten Island with a breathtaking view of the New York City skyline. As freshman “girls,” we lived at Guild Hall with curfews, quiet hours, and no men allowed except on Sunday afternoons. I think a story about our college Open House rules is certainly in the making. Does anyone else remember “doors” open” and “one foot on the floor”? Sounds stifling by today’s standards? I loved every minute of college life. The overriding thought about dorm living was how I became aware that by spending time with other women – studying, sharing clothes and makeup, listening to first date happiness or disasters, I was building caring relationships. It was in my freshman year at Guild that I met Aino Kay Lautsio and was a suitemate with my twin Eileen.

4. and 5. Later years my sister and I had cluster rooms with our independent women friends – Bev, Judy, Linda, Angie, and Mickey in Towers Dorm and the New Dorm (not so new anymore). I’ve reconnected with Aino Kay and Linda.  The “home” feeling came from the friendships, open doors, sharing, and an incredible amount of laughing.

How many have you had so far?

Tomorrow: Homes on My Own

Ethel Lee-Miller blogs regularly about people, the power of words, and the writing life. She is the author of Thinking of Miller Place, and Seedlings, Stories of Relationships. She also enjoys sharing stories at Odyssey Storytelling, Tucson Tellers of Tales, and just about anywhere there’s a mic.